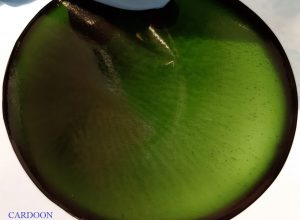 WP3 activities are focused on the use of proteins from cardoon flour (CPs) to prepare hydrocolloid bioplastics. 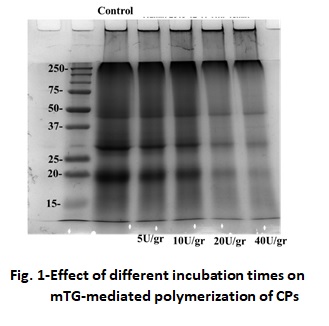 In the Task 3.1 (Cardoon flour proteins as mTG subtrates) the  proteins from cardoon seeds are tested as substrates of microbial transglutaminase (mTG). The main disadvantages of protein- as well as polysaccharide-based films are their low mechanical properties and high sensitivity to moisture that reduce the barrier properties of these materials. In particular, protein films have very low oxygen and carbon dioxide permeability. They should be kept in a dry state since water molecules act as plasticizers, thus, increasing molecular mobility and, therefore, permeability to gases. In order to improve the functional properties of the hydrocolloid films, the enzyme transglutaminase of microbial origin (mTG, protein-glutamine γ-glutamyl transferase, E.C. 2.3.2.13) has been successfully exploited during the last 15 years [1] mTG is a calcium independent enzyme that  catalyzes the introduction of ε-(γ-glutamyl)-lysine crosslinks into proteins via an acyl transfer reaction. The possible ability of CPs to act as mTG substrates was analysed and the results demonstrated that these proteins are an effective substrate for the microbial enzyme (Fig.1)
The Task 3.2 (Cardoon flour proteins based FFSs) is focused on the preparation of Film Forming Solutions (FFSs) from CPs. The remaining by-product after oil extraction is a valuable source of fibers, proteins as well as of bioactive compounds (Mirpoor et al., 2021, 2022). Towards a development of a cardoon-based biorefinery, the seed proteins obtained following the oil removal were exploited for the production of novel bio-plastics potentially able to become candidates for replacing the petroleum-derived plastics highly pollutant for the environment. Hence the FFSs were characterized and the derived films analyzed according to their technological properties. In addition antioxidants from cardoon leaves were also extracted (CLE) and used to functionalize the CP-based FFSs that were further  characterized. The FFSs also 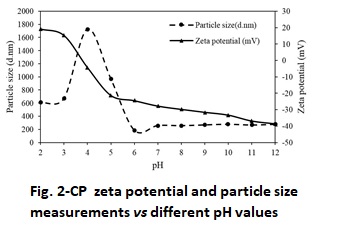 contain plasticizers able to improve film extensibility and flexibility, as well as different bioactive molecules. Stability of FFSs are validated through zeta potential analyses (Fig. 2).  The data reported in Fig. 2 show that CPs were positively charged in the acidic pH range, since the detected zeta potential was found to increase from a value of about -40.00 mV at pH 12 to that of about -30 mV at pH 7.0 and 0 mV just under pH 4.0, indicating that the electrostatic repulsion pattern was gradually modified as a result of the gradual deprotonation of carboxyl groups and protonation of the amino groups of each CPs present in the sample. As far as the CP particle size, it also varied, like zeta potential, as a function of pH. In fact, at pH ≤ 5 high molecular mass protein species were present in the solution, likely because the isoelectric point of CPs was between pH 4 and 5 where the zeta potential value was around 0 mV. CP zeta potential and particle size were measured also in FFSs prepared at pH 12 (the pH used for preparing the films by casting) by varying the concentrations of both proteins (200, 300 and 400 mg) and glycerol (GLY) (30%, 40%, 50% w/w of CPs) . All the FFSs tested were quite stable, regardless of protein and GLY concentration, zeta potential value fluctuating between -28 mV and -33 mV. As far as the particle size, it did not change by varying the GLY content, but it significantly increased by enhancing CP concentration, likely as a consequence of protein aggregation. However, the observed size distribution in the range of 300-400 nm is in agreement with previous results obtained with protein-based FFSs prepared by using other oilcakes (Mirpoor et al., 2020; 2021).