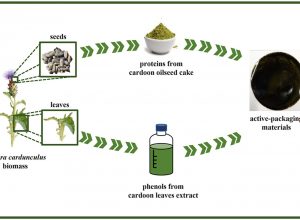 Cardoon (Cynara cardunculus), an herbaceous perennial plant able to grow with high productivity in dry and hot regions, as well as in unproductive soils, was used as a biomass source for the production of both bioactive compounds derived from leaves and proteins extracted from seeds. Naviglio® technology was found as an efficient method to obtain a cardoon leaf extract (CLE) characterized by high phenol content and oxygen scavenging activity. On the other hand, cardoon proteins (CPs) were demonstrated to give rise to handleable greenish films endowed with promising mechanical and barrier properties in the presence of glycerol used as plasticizer. Hence, the CLE was used to functionalize the films that were further characterized. Film microstructure observed by SEM revealed a good compatibility among CPs and CLE, showing a uniform distribution of the leaf extract components throughout the film network that reflected, in turn, an improvement in the mechanical and barrier properties of the obtained material. In addition, the CLE containing films exhibited higher hydrophobicity, as indicated by the contact angle measurement and by the evaluation of water solubility and swelling degree experiments. Finally, CLE-containing films showed a marked antioxidant activity, highlighting the potential of Cynara cardunculus to be exploited as a biorefinery where different low-value renewable biomass materials are turned in several higher value bio-based products.