WP4 will be aimed at the development of bioprocesses for the conversion of root inulin (from WP1) into PHAs and lactic acid.

Two parallel approaches will be pursued:

A Consolidated BioProcess (CBP) for simultaneous inulin hydrolysis and PHA production will be set up by: i) constructing ad hoc engineered microorganisms able to fulfil both the inulin hydrolysis and PHA production task; ii) designing artificial microbial consortia composed of both an inulinase and a PHA producer. The co-culture performances were optimized through response surface methodology. 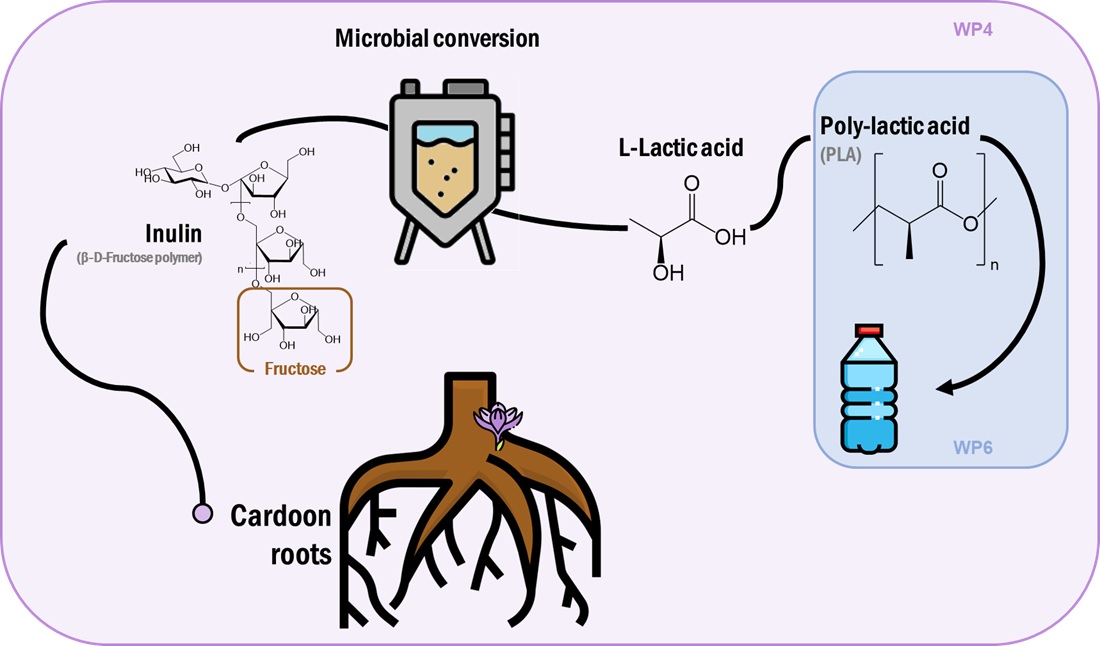 Two different approaches will be followed:

Lactic acid is an organic acid authorized by the U.S. Food and Drug Administration as GRAS (generally regarded as safe), that could be produced by microbial fermentation [1]. It is considered one of the most important chemical platforms due to its versatility. It finds application in the food, cosmetic, pharmaceutical, and chemical industries. In addition to that, it caught the attention as a precursor of poly‐lactic acid (PLA), a sustainable alternative to petroleum‐based plastics [2] and for that reason the demand from the market is increasing in recent years.

In order to produce lactic acid, selection experiments were performed to isolate inulin assimilating and lactic acid producing bacteria from the cardoon rhizosphere. This activity led to the isolation of two potentially interesting bacterial strains identified by 16S rDNA sequencing as Clostridium beijerinckii and Sporolactobacillus nakayamae. Concurrently, yeast strains belonging to the UNIMIB-IndBiotechLab collection were considered. Finally, attention was focused on the homofermentative yeast Saccharomyces cerevisiae m850 [3] and the heterofermentative yeast Zygosaccharomyces parabailii Z2Δ+LDH [4], both lactic acid producers and the latter selected also because of its outstanding ability to cope with low pH and organic acids. All the microorganisms selected for their ability to produce lactic acid will be tested on commercial inulin and on inulin obtained from root extracts hydrolyzed by either commercial inulinase or Kluyveromyces marxianus culture supernatant (next step, see below).

Inulin consists of linear chains of β-2,1-linked D-fructofuranose molecules terminated by a glucose residue through a sucrose-type linkage at the reducing end [5]. Inulin is considered an interesting source of fermentable sugars, which can be completely exploitable as carbon sources by several microorganisms only after hydrolysis into monomers. Enzymatic hydrolysis of inulin is generally preferred to the chemical one, as it is more environmentally friendly, and it does not lead to the formation of compounds which can limit the growth of microorganisms [6].  Among the microorganisms known to produce the inulin hydrolysing enzyme, namely inulinase, K. marxianus CBS6556 has been selected [7].

The growth conditions of K. marxianus as well as the hydrolysis parameters were optimized to successfully hydrolyse commercial inulin, in view of applying the protocol on cardoon roots extracts. The highest release of fructose after 24 hours of hydrolysis was obtain when the reaction was carried out at pH 5 and 50 °C using the supernatant of K. marxianus cultures grown for 48 h at 30 °C on synthetic minimal medium containing urea as nitrogen source (Fig. 1).

Two strategies were considered to combine the inulin hydrolysis and the lactic acid production: a) the SSF (Simultaneous Saccharification and Fermentation) approach, which consisted in the addition of the supernatant of K. marxianus CBS6556 cultures directly in the fermentation medium, for triggering the release of sugars from inulin and therefore sustain the production of lactic acid by Saccharomyces cerevisiae m850 (Fig. 2);

b) a CBP (Consolidated BioProcess) for the production of lactic acid based on microbial consortium composed of the inulinase producing yeast K. marxianus CBS6556 and the yeast Zygosaccharomyces parabailii Z2Δ+LDH (Fig. 3).

The culture broth rich in lactic acid will be supplied to WP6 in charge of synthesizing polylactic acid (PLA) samples. Then, the polymer will be characterized in terms of chemical and mechanical properties. 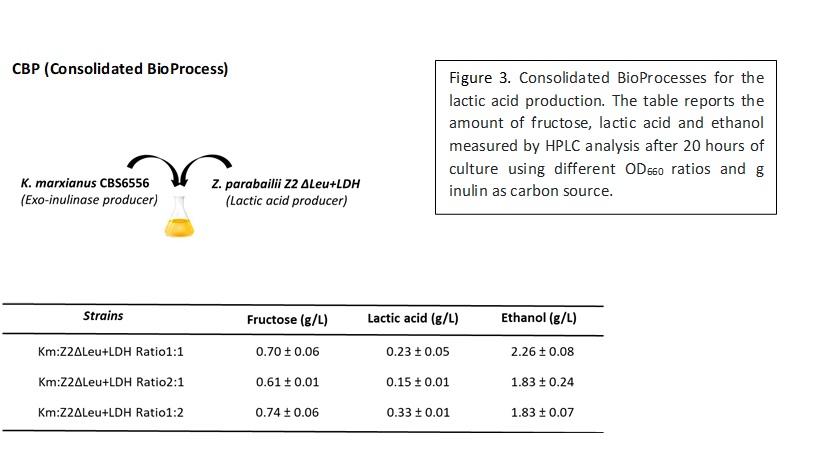