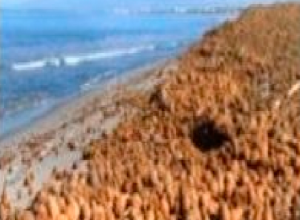 Nanocrystalline cellulose (NC) and a lignin-containing fraction (LF) were obtained from egagropili, the so called sea balls produced from rhizome and stem fragments of Posidonia oceanica that accumulate in large amounts along the coastal beaches in the form of tightly packed and dry materials of various dimensions. Both egagropili fractions have been shown to be able to improve the physicochemical properties of biodegradable films prepared from protein concentrates derived from hemp oilseed cakes. These materials, manufactured with a biodegradable industrial by-product and grafted with equally biodegradable waste-derived additives, exhibited an acceptable resistance with a still high flexibility, as well as they showed an effective barrier activity against water vapor and gases (O2 and CO2). Furthermore, both NC and LF decreased film moisture content, swelling ability and solubility, thus indicating that both additives were able to improve water resistance of the hydrocolloid films. The exploitation of egagropili, actually considered only an undesirable waste to be disposed, as a renewable source of reinforcing agents to blend with different kinds of polymers is suggested