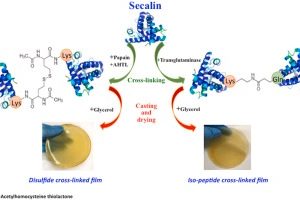 With the aim to create new food ingredients and packaging, cross-linked secalin (SCL) was synthesized by papain-catalyzed disulfide bond formation in the presence of N-acetyl-DL-homocysteine thiolactone (AHTL). The effects of SCL structural modification on the protein functional properties, as well as of the derived films, were investigated at several concentrations of AHTL and compared to those produced by the iso-peptide bonds formed in the presence of different concentrations of transglutaminase (TG). Cross-linked SCL exhibited improved emulsifying and foaming properties, whereas the derived films showed increased mechanical, barrier and water resistance properties. In particular, AHTL/papain mediated cross-linking was more effective in increasing the elongation at break (200%), Young’s modulus (200 MPa), surface hydrophobicity and barrier properties of SCL-based films (water permeability halved, that to oxygen one tenth and that to carbon dioxide one twentieth), while films obtained with TG cross-linked SCL showed higher tensile strength (4 MPa) and lower swelling index (83%). SEM analyses showed a more compact structure in the films obtained with AHTL/papain-cross-linked SCL, whereas thicker films (50% more) with porous surface fractures were observed when SCL was formerly modified by TG. The different behavior of the two groups of films prepared with SCL differently cross-linked was probably due to the different microstructure of the derived films dependent on the shorter distance of iso-peptide bonds obtained by TG with respect to the disulfide bonds resulting from AHTL/papain reaction. These findings indicate that the two different enzymatic cross-linking methods can be used to prepare SCL with improved functional properties to be utilized as food ingredient or for potential packaging applications.