O3– Lactic acid has versatile properties as precursor for chemicals and materials and about 40% of the produced lactic acid is used in PLA manufacturing [35]. PLA is one of the most important polymers obtained from 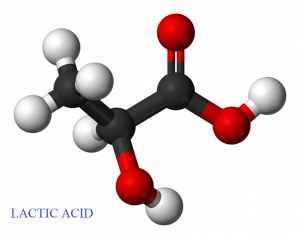 biomass because it can be used for a wide range of applications (disposable household items, food packaging, agricultural films, etc.). Fermentation processes that involve the production of lactic acid have been used in food preparation since centuries. The costs for the required high degree of lactic acid purification still contribute significantly to the overall production costs and this relates directly to the choice of the production organism. The second major cost is related to the carbon and energy source. Lactic acid bacteria are natural producers of the desired acid. Processes based on lactic acid bacteria have been established long time ago starting from glucose-based materials. High concentrations of lactate (well over 100 g/L) and high volumetric productivities (10-23 g/L·h) can be reached. Metabolic engineering allows the heterologous production of lactic acid by bacteria and yeasts. However, only production from yeasts appears well suited for this task due to their tolerance to low pH conditions and the possibility to grow them on mineral media. Nevertheless, volumetric productivities are significantly lower compared to bacterial values under optimal conditions. 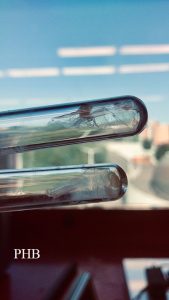 In Saccharomyces cerevisiae, production rates of about 1 g/L·h, reaching a pH of about 2.5 (well below the lactic acid pKa value) have been obtained. While data for industrially achieved productivities are not available, the order of magnitude can be estimated from the above reported values. High yield and productions require a strong limitation in the production of ethanol and the development of robust cell factories [36]. Despite yeast-based production remains well behind the values of bacterial production hosts, the advantage of the easier downstream processing outweighs this fact, promoting the taking place of the industrial production [36; 37].

PLA is synthesized through sequential chemical reactions of lactide formation followed by polymerization]. It is possible to produce PLA by direct condensation of lactic acid but the obtained product has low molecular weight. To obtain polymers with high molecular weight, lactides are produced from lactic acid (if a non homo-lactic microorganism was used in the fermentation, three types of lactides are obtained: L,L-lactide, D,D-lactide, D,L-lactide) and then, after purification, these products are polymerized [39]. The best polymers, in terms of mechanical and chemical performances, are the stereoregular ones. They are synthesized by using pure lactic acid isomers: (i) using stereoselective catalysts, stereocomplex polymers formed by a mixture of poly(L-lactide) and poly(D-lactide) are obtained [40]; (ii) synthesizing stereoregular polymers directly from pure lactic acid isomers, obtained by enzymatic routes (41).

PHAs are microbial polyesters accumulated, under stress conditions, as intracellular storage compounds by a wide range of microorganisms [42; 43]. Thanks to their biodegradability and 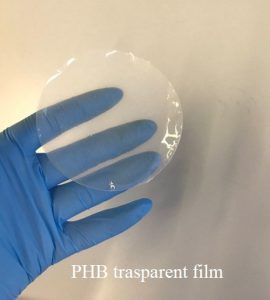 biocompatibility PHAs are considered a “green” alternative to conventional petroleum-based plastics. Although the most well-studied PHA is poly(3-hydroxybutyrate) (PHB), over 140 possible constituent monomers were found in nature and traditionally classified as short chain length (scl) (C4-C5) and medium chain length (mcl) ( C6) PHAs [44]. Such heterogeneity is the result of the integration of multiple metabolic routes refurnishing precursors for PHA synthesis and turns out into PHAs with diverse material properties. Although PHB is the cheapest widespread and best characterized member of PHA family, due to the unattractive properties of PHB-derived films (brittleness, toughness, low elongation at break) and the narrow processing window, it had so far only limited uses. Different approaches have been followed to overcome the drawbacks linked to pure PHB mainly regarding: i) biosynthesis of scl-mcl PHA copolymers with different monomers composition by choosing the appropriate producing microorganism (native and/or engineered) and feeding strategy; ii) blending with other biodegradable polymers or treatment with several organic plasticizers; and iii) designing of PHB composites [45]. All these strategies allow to enhance polymer properties and to tailor them to specific uses, including packaging. Despite their potentialities, application of PHA based materials is still hampered by their production costs, which are mainly ascribable to the material used as growth medium for biopolymer production. A trend towards the exploitation of low-cost feedstocks, such as industrial wastes lignocellulosic biomasses, for PHA production has been established in the last decade [46; 47]. 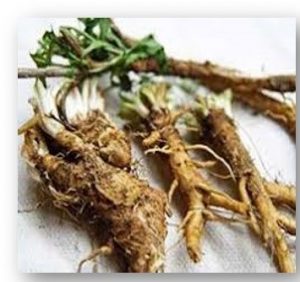 CARDIGAN biorefinery aspires to achieve a sustainable production of both lactic acid and PHA. The key is the valorisation of the inulin present in the cardoon roots through the designing of ad hoc 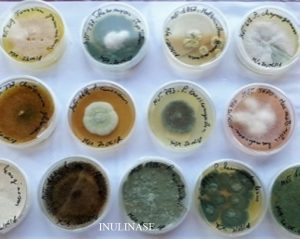 microbial processes. C. cardunculus roots contain water-soluble sugars as well as an inulin [49]. Inulins are linear fructan polymers of 20 to several thousand fructose units joined by -2,1 glycosidic bonds, typically terminating in a glucose residue linked by an -1,2 bond as in sucrose. Inulin-containing materials represent renewable, inexpensive and abundant feedstock for bioprocessing [50]. Their utilization as carbon and energy source requires an extracellular inulinase to hydrolyze the fructan into fermentable monosaccharides. Numerous fungal, yeast and bacterial strains have been isolated for their ability to produce inulinases. Within CARDIGAN, two parallel approaches will be pursued for cardoon root conversion into the fermentation products of interest: i) a two-step process, including enzymatic pre-treatment of cardoon roots, followed by the conversion of fermentable sugars by recombinant or selected bacterial strains; ii) a one-step process, in which the inulin hydrolysis and PHA or lactic acid production occurs simultaneously by means of newly isolated and/or ad hoc engineered microorganisms.